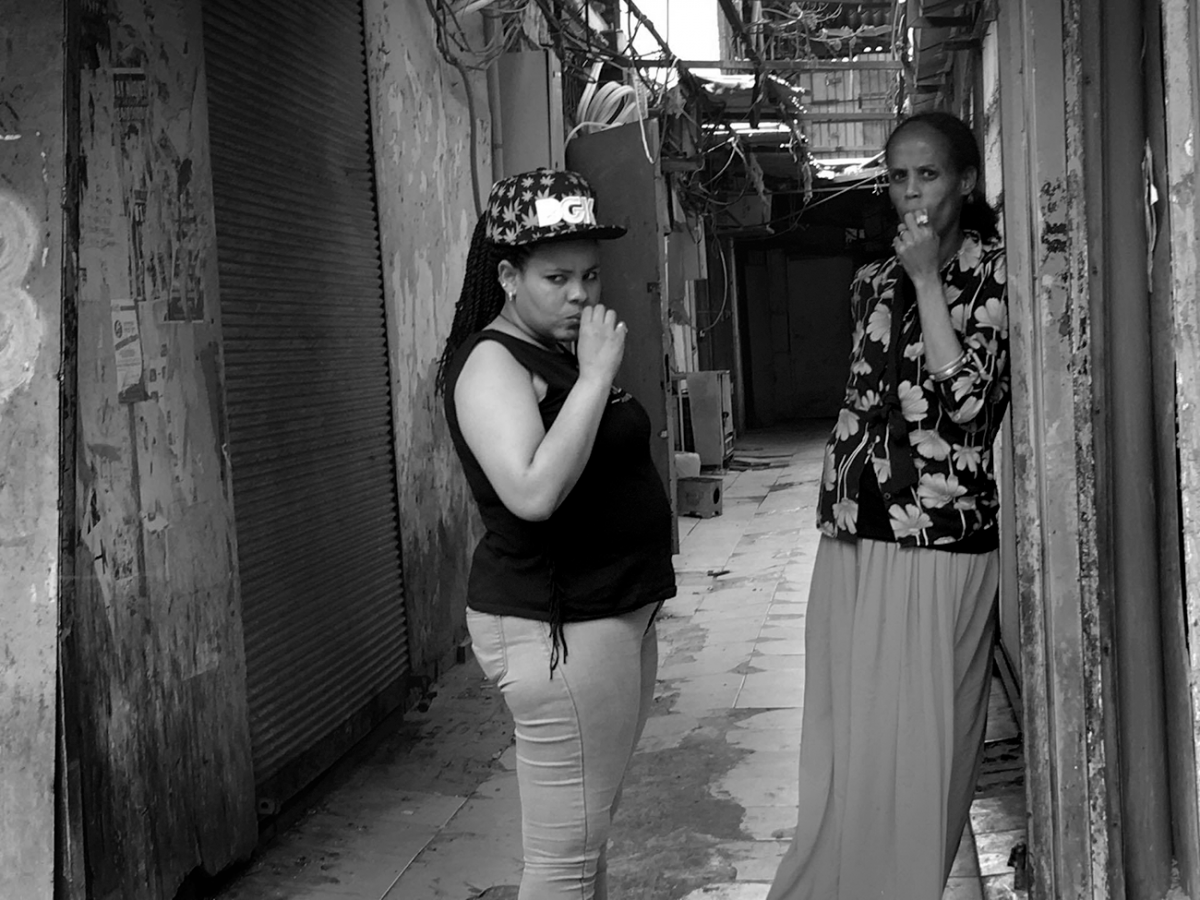 Border constructions in the backyard of globalisation.

The catcall-like sound of „pss, pss, pss“, shapes the acoustic landscape of Neve Shaanan Street. Street vendors circle around regularly on their bikes, peddling their goods. A gram of ‚brown’ costs 100 Shekel – 25 Euros. The quality, however, is pretty low – this is where those people who don’t have a choice come to buy. The famous Rothschild Boulevard is only seven walking minutes distance from Neve Shaanan. This renowned promenade, with its large number of Bauhaus-style buildings, tells the romantic founder myth of a White City by the sea, built by Zionist immigrants from Europe. The nickname ‚White City’ comes from the white of the buildings’ facades, an almost automatic effect of the white plaster used in their construction.

With each step further southwards, the white colour seems to fade some more, evolving into an unattractive grey/beige. An invisible border divides Neve Shaanan from the rest of the world, from the hip city of Tel Aviv, from the start-ups and the hipsters. Engraved in the city’s collective memory as the shabby and criminal backyard of Tel Aviv, the inhabitants stem from Tel Aviv’s poverty-stricken and marginalised south, their existence having been systematically blanked out by the local government for decades. These days, the district and its shopping street of the same name have become indicative of otherness and loss of Jewish identity. Black skin dominates the streetscape – most of the people here are asylum-seekers from Eritrea or Sudan, and occasionally migrant workers from West Africa, Asia or Eastern Europe are to be found. Yet: if you’re not Jewish, you shouldn’t be here – at least not for the long term. Many politicians as well as the mass media claim that these ‘infiltrators’ are not refugees, but just labour-seekers that should go back to where they came from. In the state, there is a gaping crevice between the Jewish value of charity and the notion that Jewish identity is being threatened. The ‚Other’ is scary, illegal, and violent, takes and sells drugs. The ‚Other’ is the Black City – a narrative that could not be bolder if it tried. The idea of globalisation is sexy, but Neve Shaanan is not. 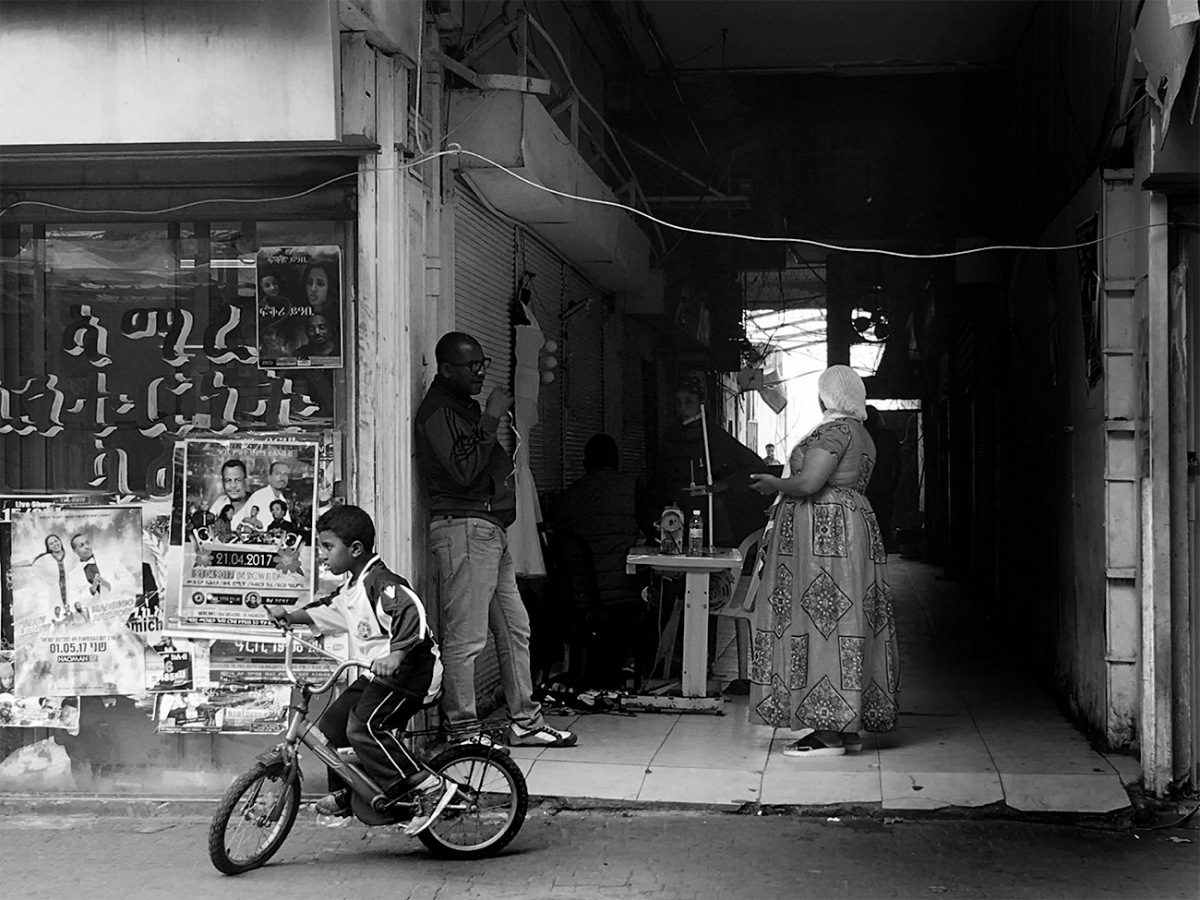 Despite its constricted space, Neve Shaanan Street is, in social terms, a heavily fragmented area. It involuntarily reflects the absorption of Israel’s numerous migratory movements, and any interaction between these groups is not always obvious.

The local architecture plays its part in being an effective instrument against the mutual dissociation from the ‚Other’. On first glance, the street might seem to be bustling with small shops, ethnic hangouts and textile sellers, yet a flourishing underground also exists, one brimming with (mainly Eritrean and Sudanese) bars, gambling joints and brothels. This intimate parallel world is, in theory, accessible to all via narrow entrances between the shops. In reality, however, it is only accessible to those in the know.

Based on Goffman’s concept of interhuman interaction as role-play on stage, (‚we all play theatre’), the glass palace in Wittenberg will be visually converted into a street backdrop. The idea of theatre on the street embodies the protagonists’ need to be in the limelight, to be seen by an audience, in stark contrast to their invisibility within the Israeli public sphere. On this particular stage, attendees and shop owners can give their own, subjective answers to questions such as “which borders exist between you and your neighbours?” and/or ‚ “which borders exist between Neve Shaanan and the rest of the world?” Finding an answer to the question approached by the GLASPALÄSTE project, “why do borders exist?”, should be preceded by a line of research where the border between the self and the ‚Other’ must first be sought. Characteristic of this is the state of separation of southern Tel Aviv from the rest of Israel, as well as the fragmentation within the cosmos of the street itself.The design of the glass palace also attempts to query the ‚underground‘ within these intermediate spaces. Guests in the glass palace are able to stick their heads through a photo wall depicting Neve Shaanan, yet will only see a dark space where Eritrean music can be heard. Confronted by this, the participants involuntarily enter into a confusion of interpretations. For the researchers and their area of research, the ‚blind spot‘ according to Goffman, the ‚backstage‘, in which unmasked interaction takes place, the perpetual character of incompleteness is preserved. These gaps in understanding can be perceived as an obstacle to understanding reality, yet they also create new scope in the perception of interaction.

The street protagonists’ answers about personal border constructions are ‚struck’ onto a transparent wall in the glass palace and combined with pictures of the city’s architecture. Complementary to this, the cube in Wittenberg will double up as a social environment for Eritreans and other refugees where the same two questions will be asked, the answers transcribed and presented within the cube in combination with images of the respondents’ respective social surroundings.

Marina Klimchuk lives in southern Tel Aviv and works with Eritrean refugee children in a therapeutic day care centre. Born in Ukraine, she grew up in Germany and studied sociology in Munich as well as International Migration in Tel Aviv.

Her interests are hybrid Identities and the social construction of bounderies in urban space. Her Master thesis, „Living in a kaleidoscope. An ethnography of ethnic boundaries and crossing points in south Tel Aviv“ was published in 2015 by the BWV (Berliner Wissenschafts-Verlag).