by the non-profit foundation KulturBotschaft in Wittenberg 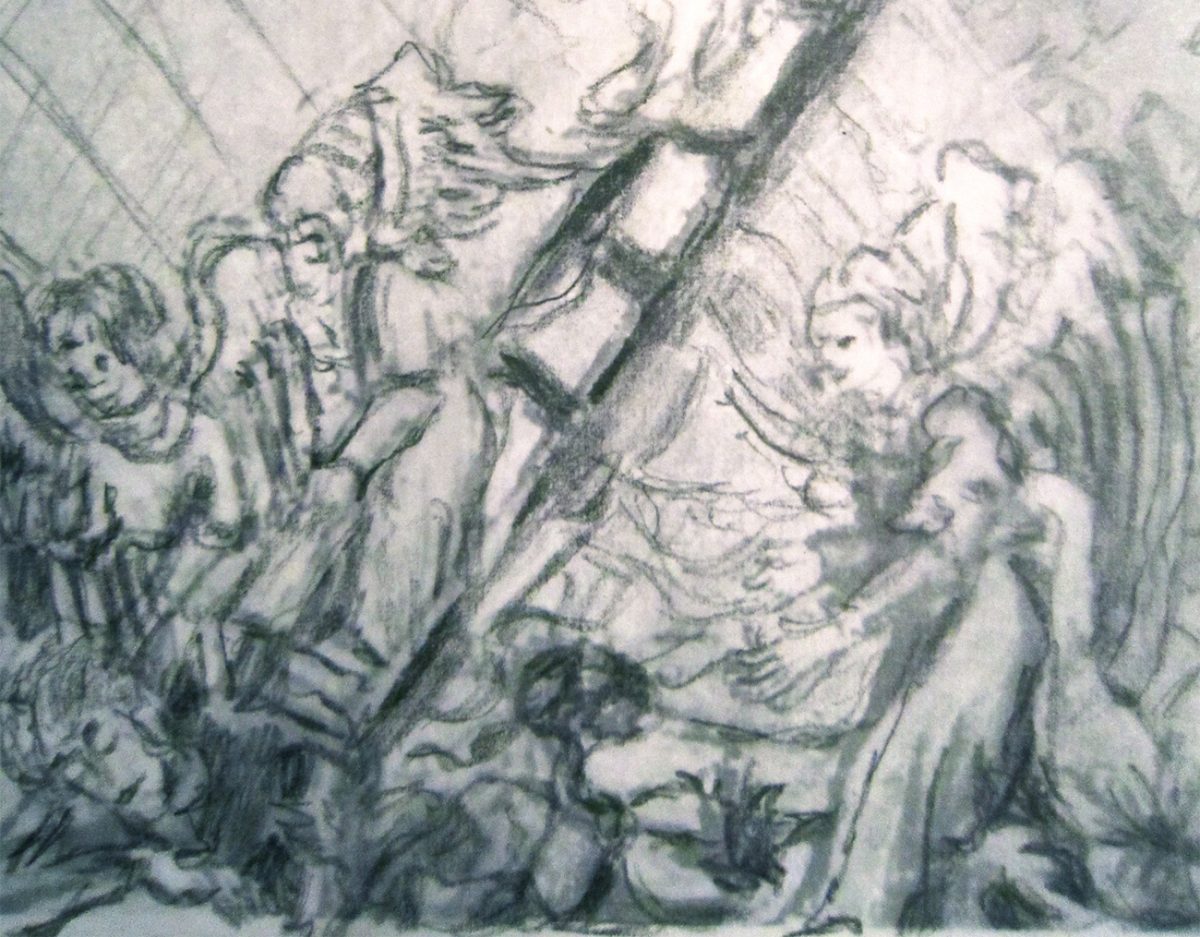 “Go not to Wittenberg” – in the footsteps of the Jewish

Jacob looks at the heavenly ladder

…Then he dreamed, and behold, a ladder was set up on the earth, and its top reached to heaven; and there the angels of God were ascending and descending on it. And behold, the LORD stood above it and said: “I am the LORD God of Abraham your father and the God of Isaac; the land on which you lie I will give to you and your descendants.”

The WITTENBERG_PALAST is an oasis in which one spends a moment and dips into a Biblical time. You rest on oriental pillows, enjoy the scent of myrrh and incense, quench your thirst with crystal clear water, fresh mint and taste almonds, dates and figs. Is that a harp or lute I can hear? You read the Old Testament, the foundation of the Torah, and observe paintings of the angels that artists have been concerned with for centuries. You open your senses and become part of this world of myths, angels and dreams.

and the socket of Jacob’s hip was out of joint as He wrestled with him. And He said, “Let Me go, for the day breaks.” … But he said, “I will not let You go unless You bless me!”… And He said, “Your name shall no longer be called Jacob, but Israel.“ 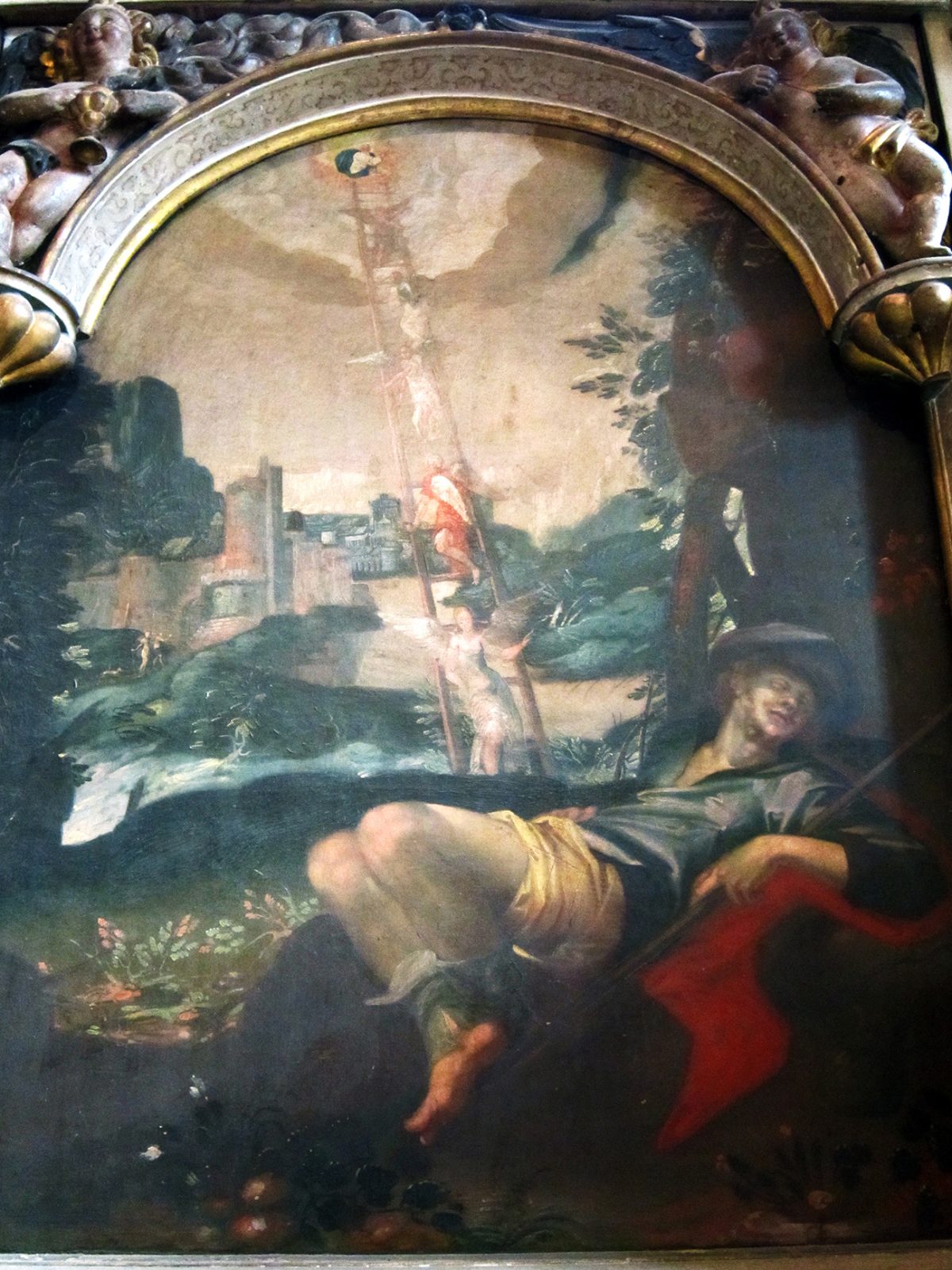 Abraham is the common ancestor of the monotheistic religions. He is the ancestor of the Israelites and the Ishmaelites. Angels appear as messengers and preachers of God in the Torah, the Bible and the Koran. The struggle with God, concerning faith, preoccupies all of us. Where do our roots lie? Who are we? Where are we going? What connects us to others? What knowledge do I personally have about the Jewish people and their history, their religion? What images are created before my eyes?

Painting workshops on the subjects of angels and dreams will be held in July in the KulturBotschaft, in close association with the WITTENBERG_PALAST, and in cooperation with the ‘Historische Farbenküche’ (historical paint kitchen). For dates and registration see www.kulturbotschaft.info

Perhaps the bird Zev will appear, headed to the Stadtkirche (town and parish church), and show the picture ‘Jacob‘s dream of the ladder’ by an unknown painter from around 1615. Outside the church, your view drifting towards the sky, you don’t believe your eyes, as you discover a sandstone relief, the ‘Judensau’ (‘Jewish sow’). Due to the Reformation that originated here 500 years ago, Wittenberg is a ‘place of Christianity’, a pilgrimage site and a national symbol, and was even a synonym for progress and scholarship during Shakespeare‘s times (hence why he located Prince Hamlet to study here).

… Let not thy mother lose her prayers, Hamlet: I pray thee, stay with us; go not to Wittenberg.

The main building and ‘base camp’ of the KulturBotschaft – Dialog der Weltanschauungen (dialogue of worldviews) lies directly opposite the town and parish church of St. Mary’s, the building adjacent to Luther‘s pulpit, but already belongs to the ‘Jewish quarter’. The Judensau, a disgrace to the mocking of the Jews, is a heavy legacy for the ‘Lutherstadt’ (Luther town), but also, of course, the entire Protestant church, from whom a position is called for. This offensive ‘Judensau’ sculpture which has been at the church for more than 700 years (!), cries out for an examination of Jewish history in Wittenberg – as well as a very personal confrontation with the Jewish. A gateway to the past is forced open, with a focus on a search for the dissenters, the disadvantaged and the voiceless (heretics, women, foreigners …)

‘500 years of the posting of the theses’ offers the opportunity to wake Wittenberg from its slumber with a kiss of life, well beyond the Reformation anniversary.

In a response to this a number of events are being planned in the WELTRAUM in the KulturBotschaft. Among others: Rom Brener / Kabbalah Center in Tel Aviv: calligraphy, open studio, presentation of a paper cut-out of the town and parish church in cooperation with Cord Woywodt -faltplatte.de, Oded Korach: ‘The Common God’, The White Mountain / KulturBotschaft curatorial project, Weltfriedensfest (World Peace Jubilee) on September 21;

The non-profit foundation KulturBotschaft was founded in 2012 in Wittenberg and is a young project space in the heart of the historical centre of Wittenberg, which is otherwise oriented towards the Reformation and Luther. The aim of the KulturBotschaft is to initiate and accompany dialogues and encounters that cross social, religious and cultural boundaries.

The foundation provides infrastructure for lectures, discussions and exhibitions. It supports and organises artistic, cultural and sociological projects.

For the world exhibition of the Reformation the focus is on the forgotten, erased and repressed common Christian-Jewish roots.

The digging and exploring, and the attempt at remembrance, also represents an object of projection and is the foundation of a common secular modernity.

The subjects of spirituality, ecology, art and music have shaped her life since her youth. Previously working as teacher in the Freiburg area, she has been at home as an artist at Lake Constance since 2016. She designed the cube MYTHS-ANGELS-DREAMS in a common concept for KulturBotschaft